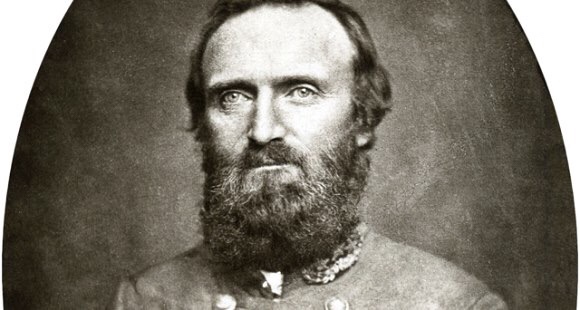 He was, in today’s vernacular, the epitome of a “nerd”. He had an odd, ungainly walk, was very strict in his interpretations of religion, and either ignored or did not see his contemporaries and his students mocking him and laughing at him behind his back for his awkwardness.

He graduated from West Point, served with distinction in the Mexican-American War, and then became a professor at the Virginia Military Institute (VMI). He was a terrible teacher, and mocking him became a tradition amongst the students.

Then the Civil War came. Thomas Jackson didn’t have any particular political views, but he was true to his “country” of Virginia. So he served, proving to be efficient at training brigades at drill and military movements.

While still considered ungainly, Jackson earned the faith of his men by always being at the front, without guile, without fear. At the First Battle of Manassas (Bull Run for the Union, Confederates called it Manassas), he did the same.

One of his contemporaries from the Mexican-American War, Gen. Bernard Bee, rallied his own men by shouting, “There is Jackson standing like a stone wall. Let us determine to die here, and we will conquer. Rally behind the Virginians!” And they did, and the battle was won.

The awkward Thomas J. Jackson had transformed into the legend of “Stonewall” Jackson and he would soon become the right hand man of Gen. Robert E. Lee. After many battles won, on today’s date, during the Battle of Chancellorsville, Jackson was returning to his camp at night when he was taken for a Yankee soldier and accidentally shot by a sentry. Within a few days, one of the South’s greatest heroes would die of his injuries.

Lee in particular would mourn the loss of a valued lieutenant, and would miss him during battles to come, particularly Gettysburg.