Opha Mae Johnson is the first woman to enlist into the United States Marine Corps when she enlists into the USMC Reserves. 304 more women followed suit the same day.

The RMS Carpathia, famous for having rushed through the night to rescue the survivors of the RMS Titanic disaster in 1912, was carrying out her duties as a WWI troop ship when she was torpedoed by U-Boat 55 and sank.

She lost all but 5 of her passengers before her survivors were rescued by the sloop HMS Snowdrop.

As an aside, one of the many Doughboys the Carpathia brought to Europe to fight the Hun was a young Frank Woodruff Buckles, a Missouri boy who when he died in 2011 at age 110, was the last American WWI veteran.

US Airman Quentin Roosevelt, youngest son of President Theodore Roosevelt, dies when he is shot down over France in WWI.

He and his brothers, who all served in WWI were very competitive in the voracity of their service, trying to live up to their father’s exploits…a father who also wanted to serve but was refused due to President Wilson’s fear that TR’s service might lead to a run for President in 1920. TR wouldn’t live that long…and he spent his last years heartbroken over the loss of his youngest son.

TR Jr. would die of a heart attack just weeks after leading his division in the Normandy invasion of 1944…again living up to his father’s legacy. A family of immense wealth; several generations of which dedicated their lives to service to their country. 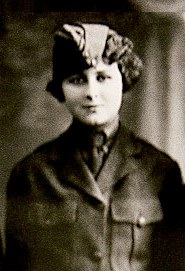 Opha Mae Johnson was the first woman to enlist into the United States Marine Corps when she enlisted into the USMC Reserves. 304 more women followed suit the same day.