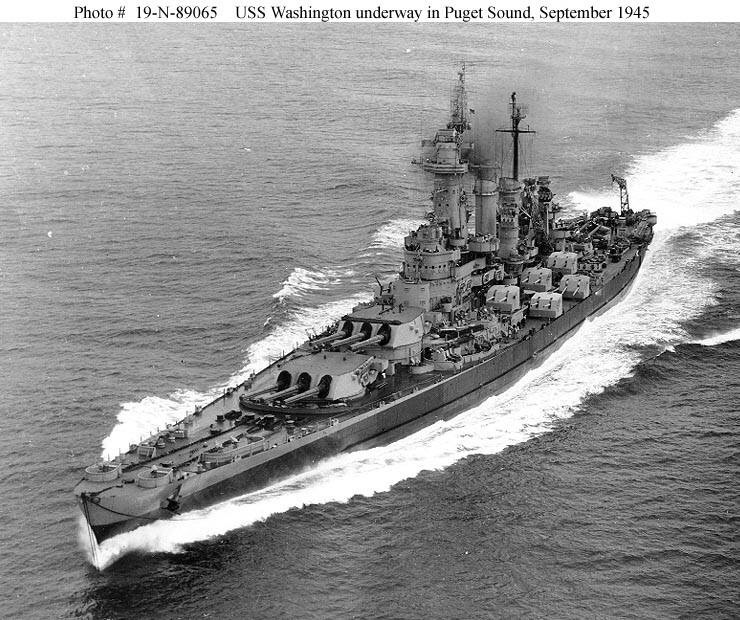 The Second Battle of Guadalcanal. Late on the 14th, early on the 15th, IJN Admiral Kondo was sent with a force of cruisers and destroyers built around the battleship Kirishima to take another shot at Henderson Field and the transports off shore.

Most of the effective American combatants had been either sunk or put out of commission in the first battle, so Admiral Halsey detached a significant portion of the screening force for the USS Enterprise to protect the airfield and the transports. The Battleships USS Washington and USS South Dakota, along with the 4 destroyers with the most fuel took the job.

This US Task Force made better use of their radar and spotted the Japanese ships first. The American destroyers sacrificed themselves to fight off Japanese cruisers and destroyers; the South Dakota had nothing but trouble after losing her electrical systems. As the Kirishima and others focused on the nearly defenseless South Dakota, the Washington closed within 9,000 yards of the Kirishima and tore her apart with her main and secondary batteries.

Kondo ordered a retreat. Some IJN supply ships beached and began unloading, but when the sun came up, they were exposed to American aircraft. By the time US aircraft and an American destroyer were done with them, only about 3,000 troops were ashore…without any supplies, munitions or food…making them more of a detriment than a help.

The major significance of this battle is that it was the last time the IJN attempted an all out assault on Guadalcanal by sea; now they would only offer meager supplies with the use of the “Tokyo Express” up the “Slot”…not enough to support their armies on Guadalcanal. By December 31st the Emperor had agreed to abandon Guadalcanal to the Allies.

The most amazing thing to me is that in ’42 the Americans won or lost by scraping together a few ships to fight…at this point Enterprise was the only US Carrier in the Pacific…by this time in ’44, American combat ships were numerous and almost invincible.