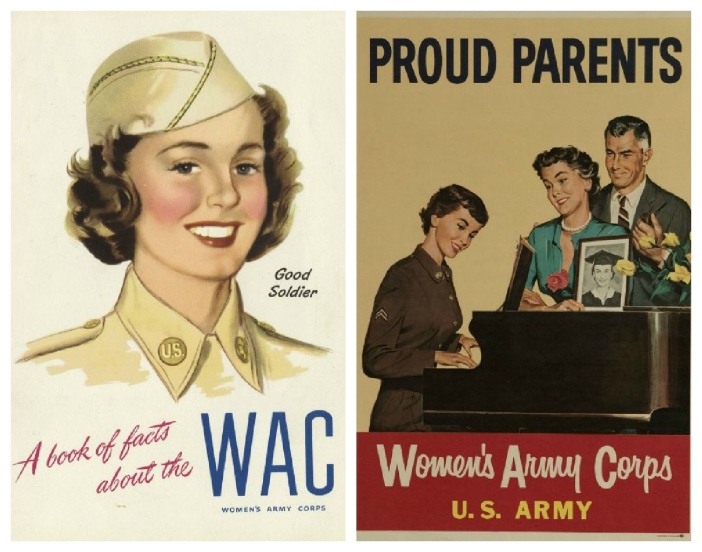 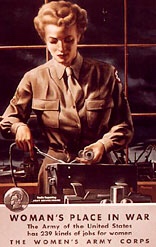 The bill had been put forward by Massachusetts Representative Edith Nourse Rogers in mid-1941, who had seen women volunteer in the first World War…on their own dime and without compensation or benefits. The bill lingered until after the attack on Pearl Harbor, when it was taken more seriously.

The many women who served as WACS and WAVES (Navy) during WWII were paid and received benefits, although not as much as the men. It would be decades before they received pensions.

Their service was to be in non-combat roles…secretarial, air traffic control, ferrying aircraft, and hundreds of other positions.

While the inclusion of the hundreds of thousands of women in the military was a huge step forward for a nation which had only given women the vote two decades before, it was still repleat with gender bias. Women could not command men.

The move also was born of necessity, rather than revolutionary thinking. It had the full support of the Army’s commanding General, George C. Marshall, who testified before Comgress on behalf of the legislation.

Marshall expected the “Two-Ocean War” to quickly overwhelm the nation’s ability to provide “manpower”. He believed women already trained in administrative jobs would be more efficient and effective than men.

While the women served in “non-combat” roles as operators, etc, you can’t serve in a combat zone without the risks of combat. WACS were killed in action. One source indicated 16. 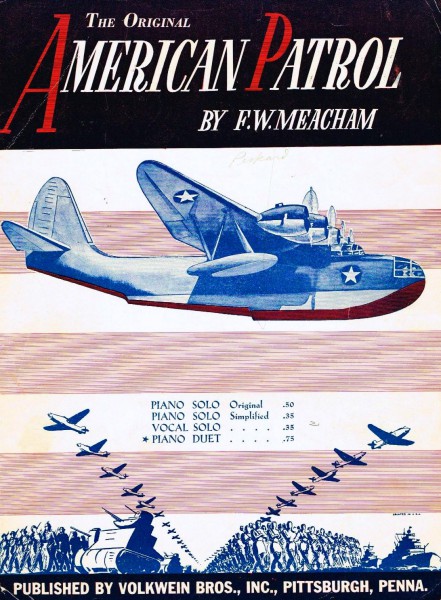 In Hollywood, California, Glenn Miller and his Orchestra record their version of “American Patrol.”  The tune was originally written in 1885 by F. W. Meacham, but Miller’s orchestra would add swing and jazz to the already inspiring instrumental.

This would make it representative and nearly synonymous with the jaunty, cock-sure attitude of American servicemen fighting World War II in multiple theaters.  Miller and his band would entertain the troops with this and other hits in live shows until his death on December 15, 1944, when he would be lost while flying to France for a performance.  Think of the most popular entertainer you can, and they would pale in comparison to Glenn Miller in the late thirties and early forties.  Major Miller’s loss was felt.

It is important to remember what was occurring in April of 1942.  The attack on Pearl Harbor was only five months in the past, American troops at Bataan were about to surrender, the US Navy was conducting hit and run raids on Japanese strongholds, the Doolittle Raid on Tokyo was in this month, and Americans were training up for the war in Europe while U-Boats lurked off of American shores.

“The Girl I Left Behind Me.”  If you listen, and know what you are listening for, at about the 1:40 mark you pick up on the overlay Miller’s crew added to “American Patrol” of “The Girl I Left Behind Me.”  While versions of this tune were popular in Dublin and the British service long before, it became popular in the US Army during the Civil War and in the Cavalry as a marching tune.  So popular in fact, you’ve likely heard it in movies about the US Cavalry. 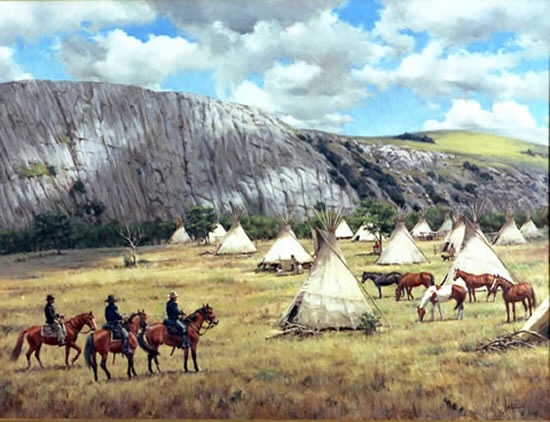 Today in History, September 4: 1886 – Apache Warrior Geronimo surrenders to US Army General Nelson Miles in Skeleton Canyon, Arizona. As a young man living with his family in the Mexican state of Chihuahua, Spaniards brutally murdered his wife and children in a raid.

Geronimo would have a hatred for Mexicans from then forward. Leading raids against non-Indian settlers, he prevented settlement of Apache lands for years. After nearly 30 years of fighting, he came to the conclusion that further fighting was pointless due to the endless numbers of settlers.

After his surrender, he ended up in Ft. Sill, Oklahoma Territory where he converted to Christianity and became a successful farmer. He became quite the celebrity, even riding with President Theodore Roosevelt in 1905 inaugural parade. 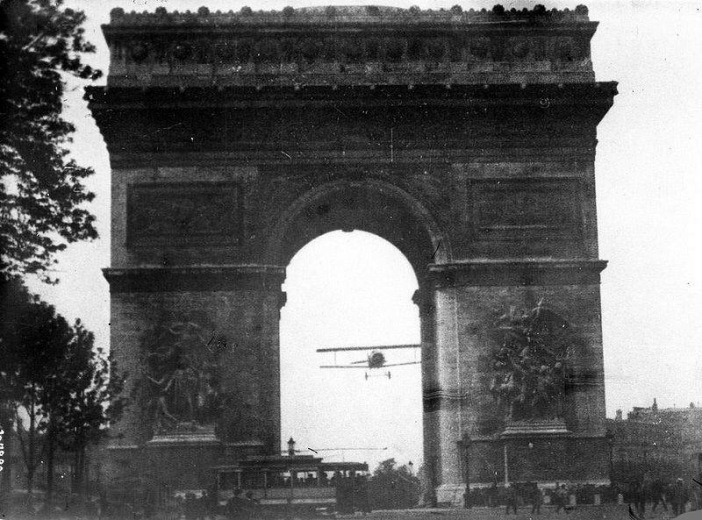 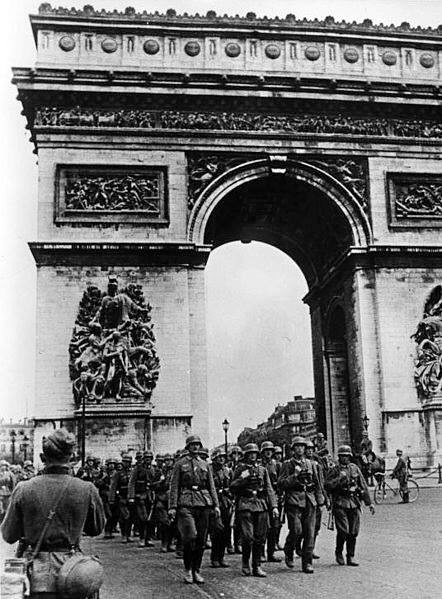 Today in History, July 29: 1836 – Originally designed in 1806, the Arch de Triomphe in Paris, France is inaugurated on this date in 1836 to commemorate French victories, mostly during the French Revolution and by Napoleon Bonaparte.

Intended for French armies to march through after military victories, it has since been used also by foreign armies celebrating their conquest of France. The Germans marched through (or around) the arch twice, the French have taken the march also, as have American and British forces liberating France after it’s conquest.

After WWI, the French tomb of the unknown soldier was entombed beneath the arch; as a sign of respect, armies have since marched around rather than through the Arch, including Hitler’s armies in 1940.

After WWI in 1919, Charles Godefroy flew his French Nieuport biplane through the Arch, giving us an idea of it’s size. 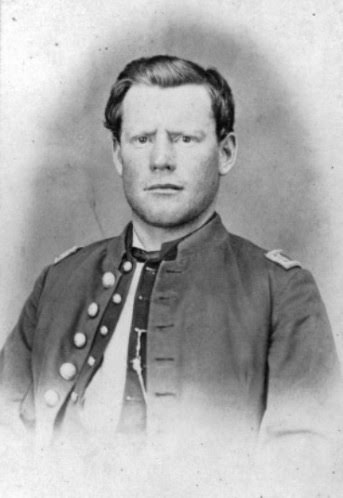 As the morning was dawning over the sleepy village, Chief Black Kettle saw them approaching, and hoisted the Stars and Stripes above his Tipi as a sign of brotherhood and peace.  And then the blue coated soldiers began firing.

The Cheyenne and Arapaho of Colorado had settled in for the winter along a bend in Sand Creek in eastern Colorado.  Resources in the barren area were in short supply and they expected a harsh time.  900-1,000 people in hundreds of Tipis, although many were out hunting buffalo that morning.

The Civil War raged further east, and in Colorado and New Mexico a few months previous.  Colonel John Chivington of the Colorado Volunteers had fought in those battles, but now was looking for a new fight.  After a family of settlers was killed, allegedly by Arapaho or Cheyenne, the Governor tasked Chivington with raising a regiment to defend against hostile Indians.  But his regiment’s enlistment was nearly up and he hadn’t found any.  So he took over 700 troops to attack the peaceful village along Sand Creek.

After the attack on the settlers, the white authorities told the peaceful Indians to encamp at military forts and facilities where they would be protected.  Chief Black Kettle had spoken to the commander of a nearby fort seeking to comply.  He was told to keep his people at Sand Creek until the commander received further orders, and they would be safe.

Hundreds of women and children dropped to their knees in front of the soldiers that morning, imploring them for mercy.  There was no mercy given as the women and children were shot down or had their skulls caved in.  Many then ran for the creek where they sought cover, or fled north.  For the next several hours Chivington’s soldiers chased them down and killed as many as they could.

Seeing what was happening, Chief White Antelope approached the soldiers, folded his arms, and began singing his death song, “Nothing lives for long.  Except the Earth and the Mountains.”

Chief Black Kettle carried his wounded wife and fled north towards another band of Cheyenne.  He would make his way to Oklahoma, where he led his people to again attempt peaceful existence.  He would live two days shy of four years more…when he and his wife would be chased down and killed by soldiers of George Custer’s command at the Massacre along the Washita River.

One of the Union officers present that day refused to follow commands and ordered his company not to fire; and tried to save some of the victims.  Captain Silas Soule was career Army and recognized the cowardly acts being carried out.  The next day he wrote a letter to a Major friend of his back east, telling of the horrific behavior of Chivington’s “mob”.  He told of women and children having their brains bashed in.  He said that Chiefs had their ears and genitals cut off as trophies, and all those killed were scalped.  The crazed killers cut out many of the women’s genitalia as souvenirs.

Chivington would escape court martial by resigning from the Volunteers.  But even during the Civil War, the government and the people were aghast at the atrocities carried out at Sand Creek, and Congressional hearings were held in 1865, which Captain Soule testified at against Chivington.  For his trouble he was gunned down in the street in Denver a few months later.  His murderers were never prosecuted.

The assault was intended to force peace for the nascent settlements in Colorado.  It had exactly the opposite effect, as the Cheyenne Dog Soldiers and others fought a decade’s long war with the settlers, their trust of the white people destroyed.

The story was eventually almost forgotten, and was a touchy subject when it was spoken of.  However Colorado eventually began to come to terms with this dark part of its history, and in 2007 the Sand Creek Massacre National Historic Site was established, run by the National Park Service.  Many visit the site in homage to the approximately 200 Native Americans who died that day.

Several of the sites I read in preparation for this posting indicated the subject was not covered much until the 2000’s.  However if you read (or watch) James Michener’s “Centennial”, you’ll find that he covered the events very well, just with a change in names.