President John Fitzgerald Kennedy was a US Navy Veteran of the Second World War. He had served in the Pacific Theater, commanding PT-109, a “Patrol-Torpedo” boat about 77 feet in length. His boat was sunk in the Solomon Islands and he became a war hero for his efforts in his crew’s rescue. But that is another story.

As President it was his habit to attend the annual Army-Navy game to unabashedly root for Navy. He planned to attend the game on December 1, 1963. However he was cut down by an assassin’s bullet in Dallas, Texas on November 22, 1963.

Out of respect for their commander in chief the services postponed the game. Kennedy’s widow asked that the game be played in his honor.

On December 7 the game was held in Philadelphia. It would become a landmark game because when Army scored a touchdown, the producers decided to use a new technology for the very first time. They used their new machinery to instantly replay the touchdown for viewers. Their phones immediately lit up as viewers were confused as to whether Army had scored twice! Of course this technology has advanced markedly since and is frequently utilized to decide debated plays.

Navy Quarterback Midshipman Roger Staubach led “The President’s Team” to a 21-15 victory over Army. Staubach would receive the Heisman Trophy and go on to lead the Dallas Cowboys in a remarkable career. 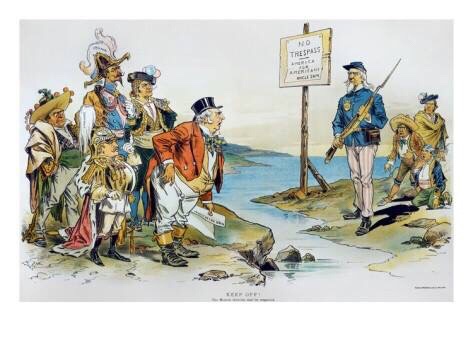 President James Monroe announces in his State of the Union address what will become known as the Monroe Doctrine…telling the European powers that America would not interfere in European conflicts (we didn’t want to and did not have the means anyway), and that America would police the western hemisphere…Europeans were to stay out. We couldn’t really enforce this doctrine at the time, but it was to England’s benefit…so the Royal Navy did so for us.

In 1904, when European powers attempted to collect on supposed debts the Americas, Theodore Roosevelt added the Roosevelt Corollary to the Monroe Doctrine. The Corollary again told outsiders that if there were problems in finances in Western Hemisphere countries, the US would handle it.

The Doctrine has been tested repeatedly over the years, most notably and dangerously during the Cuban Missile Crisis of 1962 when the Soviet Union attempted to place nuclear missiles 90 miles off America’s southern shores. President Kennedy responded with a Naval Embargo, and after a few days Soviet leaders blinked. 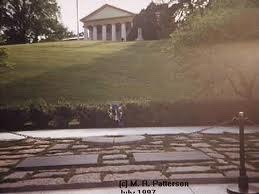 “It was so magnificent I could stay forever”.

The Spring before his assassination, President John Fitzgerald Kennedy toured Arlington National Cemetery. He made the above comment while standing at the Custis-Lee Mansion, where Gen. Robert E. Lee had lived prior to the Civil War. I’ve been there, and can understand his feelings…it is a beautiful view. Unfortunately he would “stay forever” there far too soon. This is the site of his final resting place, marked by an eternal flame, where he was moved to on this date in 1967.

PT-109 (Patrol Torpedo) is patrolling Blackett Strait in the Solomon Islands when it is rammed and cut in half by Japanese Destroyer Amagiri.

Two of the crew are killed outright, but 11 others survive, although some are badly injured/burned. Their very young commander carried one of the injured on his back in the mile + swim to a nearby island. He then took turns with the boat’s exec swimming back out into the channel attempting to signal other PT’s at night while avoiding Japanese patrols.

Finally they were rescued thanks to natives working for an Australian coast watcher. Lt. John Fitzgerald Kennedy, who could have easily sat out the war due to his wealth, displayed incredible courage and loyalty to his crew.

One question not asked in the propaganda of his Presidential campaign was, how does a craft that is basically a speedboat, navigated by an experienced sailor, get rammed by a slow moving man-of-war? That aside, nobody can deny President Kennedy’s courage.