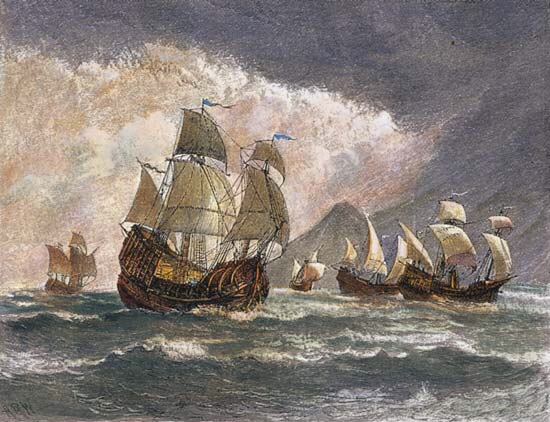 Magellan persevered through lengthy explorations of rivers that did not lead to his destination, a mutiny by the captains of his ships, and finally…the discovery of the passage at the southern tip of South American which bears his name.

After transiting a straight that suffers some of the worst weather on Earth, his small fleet sailed across thousands of miles across an unknown Ocean which he named “Pacific” for its calm waters until they reached the Phillipines. There, Magellan was killed in combat with a native tribe. Two ships remained.

They made it to the Spice Islands and took on cargo. One made a failed attempt to sail back across the Pacific; the other completed the first circumnavigation of the globe to return to Spain. 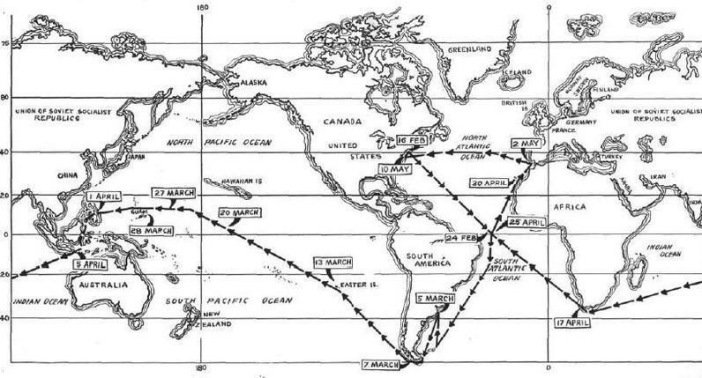 Today in History, April 25: 1960 – The first circumnavigation of the Earth – Submerged. The nuclear submarine USS Triton, SSRN 586, commanded by Capt. Edward L. Beach, began and ended the trip at the St. Peter and Paul Rocks in the mid-Atlantic and completed the trek in 60 days, entirely submerged. Beach had taken part in the Battle of Midway and commanded several submarine patrols during WWII, an experience he used to become a best-selling author, including “Run Silent, Run Deep” in 1958 which was turned into a Clark Gable movie. Operation Sandblast generally followed the route that Ferdinand Magellan had taken between 1519 and 1522 in the first circumnavigation of the Earth.