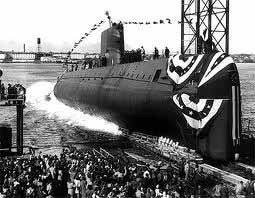 Today in History, January 21: 1954 – The USS Nautilus (not the first), in this incarnation the first nuclear powered submarine, SSN 571, is launched at Groton, Connecticut, christened by First Lady Mamie Eisenhower.

She would also be the first submarine to sail beneath the Arctic. Her WWII ancestor had a storied career also, conducting numerous war patrols in the Pacific. Jules Verne had used the name for his stories; but the results of Admiral Hyman Rickover’s hard work made the name.

Today in History, August 3, 1958 – For centuries European nations had sent forth explorers with one goal in mind…to find the Northwest Passage to the Orient to enhance trade.  Many failed, many never returned and their fate is unknown.

In 1947 a Russian born U. S. Navy Captain named Hyman Rickover was placed in charge of a program to build the first “Atomic” powered submarine in the world.  By 1954 his team had done so, and the USS Nautilus came to be.

On this date in 1958 the world’s first Nuclear powered submarine sailed beneath the Geographic North Pole, going on to traverse the Polar Ice Cap for the first time, creating the long searched for “Northwest Passage.”  Of course the submerged ship carrying 116 men 500 feet beneath the surface of the ocean did not create the path of commerce nations long dreamed of, but it was a technological marvel.