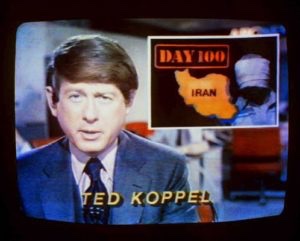 “Nightline”, an ABC news show, premieres, according to Historyorb.com.

The most interesting part of this story is that “nightline” with Ted Koppel actually began in November 1979 with the Iran Hostage Crisis. But then, that was focused on the Democrat administration of Jimmy Carter, so we can’t report that accurately.

The program had its beginnings on November 8, 1979, just four days after the Iran hostage crisis started. ABC News president Roone Arledge felt the best way to compete against NBC’s The Tonight Show Starring Johnny Carson was to update Americans on the latest news from Iran. At that time, the show was called:

Ted Koppel, then ABC News’s State Department Correspondent, took on the hosting duties. It wasn’t until a few days later that a producer had the idea of displaying the number of days on “America Held Hostage”: Day 15, Day 50, Day 150, and so on.

The show continued to run as Nightline after the hostages were freed, and Ted Koppel became one of America’s most respected journalists.