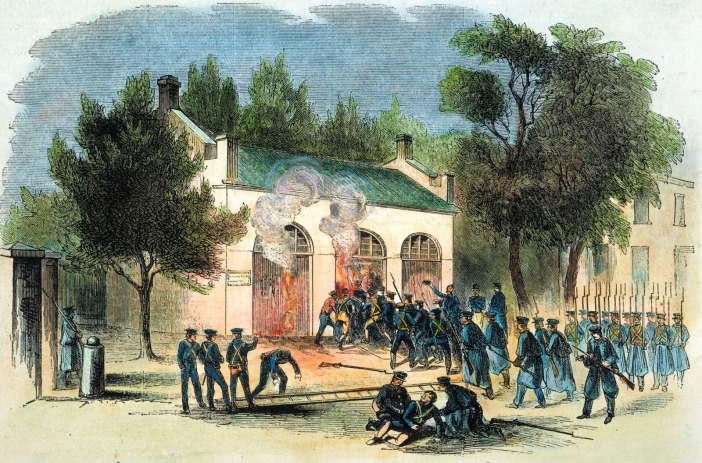 Abolitionist John Brown leads a small group of followers on a raid of the US Army Armory in Harper’s Valley, Virginia. Brown planned to seize the weapons in the armory and start an insurrection. He believed he would be sparking a firestorm of slaves and abolitionists around the country to end slavery.

However local militia grabbed their weapons and responded quickly, surrounding the armory. A contingent of US Marines led by US Army Colonel Robert E. Lee and Lt. JEB Stuart arrived and attacked the armory, killing several of the raiders and arresting a wounded Brown. Brown was hanged on Dec. 2nd of the same year.

It may not have happened as he envisioned, but within months of the raid at Harper’s Ferry, the nation would be in the midst of a Civil War that would result in his goals being achieved.

The men that led the contingent that arrested him would be Confederate leaders. John Brown’s legacy would include an inspirational marching song that would be come immensely popular in the North, entitled “John Brown’s Body”. The ballad would have many versions, but the final song matched to the tune would become “The Battle Hymn of the Republic”.

“I Love Lucy” premieres on CBS. The series, at the beginnings of network television, starred Lucille Ball and her husband Dezi Arnaz among others.

Lucille Ball had been a Hollywood starlet, but quickly displayed her remarkable talent for comedy. The show was a hit and can still be found in syndication.

The first successful (after a fashion) submarine, the CSS Hunley, sinks in Charleston Harbor. It was the second time the sub had sunk. Earlier it had gone down in Mobile Bay, killing two of it’s crew.

It was salvaged and transported to Charleston by train, to be used in an attempt to break the Union blockade of that port. The sub’s creator, Horace Hunley, took her out for a test run with a new crew. In front of onlookers, the sub slipped beneath the waves, and never surfaced. Hunley and 7 crewmembers died.

Nonetheless, the sub was once again salvaged and yet another crew took her out in February of 1864. They placed a torpedo (mine) against the USS Housatonic and backed away; the explosive sank the Union ship. But the Hunley never made it back to port, sinking for the final time, taking another crew with her. She was raised in 2000.