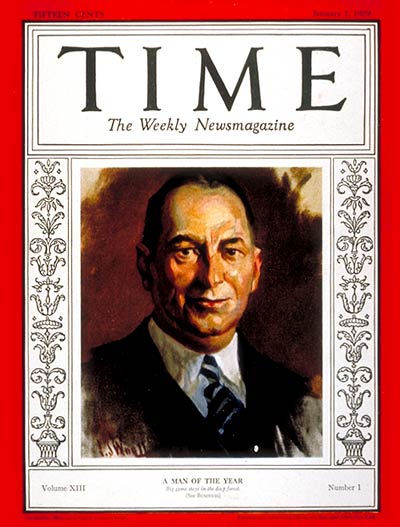 Today in History, January 7:  1929 – Walter Chrysler is named Time Magazine’s Man of the Year for 1929 amid the success of the company named for him.  Chrysler had been born the son of a railroad engineer, had worked for the railroad and then for the auto industry, rising to be the head of General Motors’ Buick Division.  In the 1920’s he saved the Willys-Overland Company (which later would design and produce the WWII Jeep) and the Maxwell-Chalmers Company, which would become Chrysler.  Also in the twenties Chrysler bought out the Dodge Brothers Company and built the Chrysler Building, which would, for a time, be the world’s tallest building.  Also, this would not be the last time Walter Chrysler would be featured on Time’s cover before his death in 194o.

Sadly, this date would again be important for the Chrysler Corporation.  On this date in 1980 President Jimmy Carter would sign the “Loan Guarantee Act”, a 1.5 Billion dollar bail out of Chrysler asked for by the company’s new leader, Lee Iacocca, in a desperate effort to save the auto maker and its many jobs.  The company had struggled to make the change to smaller, more efficient cars in the seventies.  The company has since been bought by Daimler-Benz, and then Fiat.