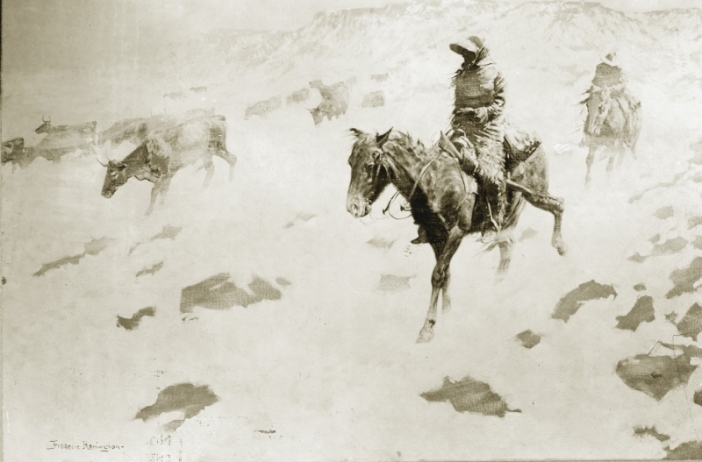 Today in History, January 9:  1887 – The Great Blizzard of ’87.  Those of us that love old westerns are familiar with the scene of cattle drives and of huge herds of cattle grazing on the open range.  That all ended on this date in 1887.

Beginning in the 1860’s ranchers in Wyoming, Montana and the Dakotas kept larger and larger herds of cattle, setting them free to graze on the open range, then bringing them in for “Round-ups” to ship them east (one of these ranchers was a young Theodore Roosevelt, who nearly lost everything in the venture).

The summer of ’86 was hotter than most, leaving very little for the cattle to graze on to begin with.  When an unusually harsh winter began, they were already famished.  The ranchers had put little aside to feed the cattle.  And as Roosevelt writes in “Hunting Trips of a Ranchman, Sketches of Sport on the Northern Cattle Plains”, not enough feed could be stored for the large herds anyway, and they were too scattered to get the feed to them in any event.  The ranchers focused on driving the segments of the herds they found towards grassy, more sheltered areas when they roamed into sparse areas.

The winter of ’86-’87 was harsh already, then on the 9th of January a blizzard struck which dropped 16 inches of snow across the northern plains within 16 hours.  As if that wasn’t bad enough, a Chinook (warm weather) blew through, melting the top layers of snow.  When it inevitably re-froze, it formed a thick layer of ice on top of the snow which the cattle could not break through.  What little grass was left could not be reached.

The cattle roamed into the local towns, bawling for food which none of the settlers had to give.  When the thaw happened in the Spring, there were millions of rotting carcasses across the plains, tainting water sources.  Many of the ranchers went bankrupt.

The event changed forever the agriculture on the northern plains.  Ranchers ran much smaller herds, grew their own sources of food for the cattle they had, and began fencing off the open plains so they could keep their herds close.