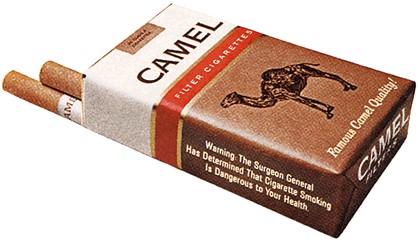 Today in History, January 11:  1964 – US Surgeon General Luther Terry publishes Smoking and Health: Report of the Advisory Committee to the Surgeon General of the United States.  The information was not new to the medical community, but it put an official stamp on it.  It led to the warning on cigarette packages and a war upon the tobacco industry.

Smoking tobacco was made popular in England when Sir Walter Raleigh brought tobacco and potatoes back from his adventures in the New World during the sixteenth century.  Tobacco was a key portion of America’s agriculture for years.

Individual rights, obviously, make smoking an individual right.  Millions have died due to its use, however, including both of my parents, victims of the pictured “Camel” and “Pall Mall.”  So personally, I’ll be quite happy when all of my loved ones make the choice to quit.