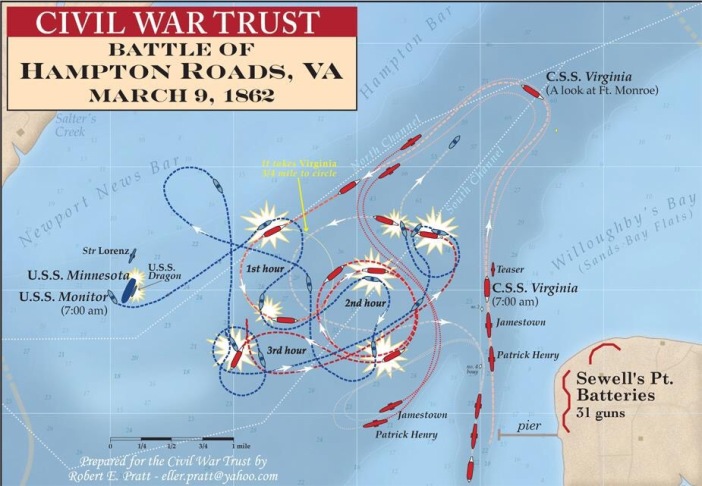 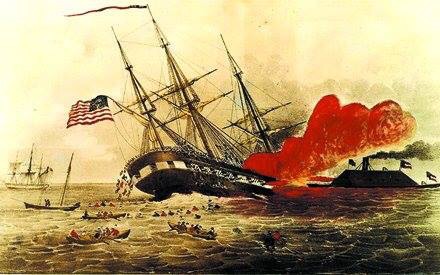 Today in History, March 9: 1862 – The Battle of Hampton Roads. Few are able to be part of a truly history changing event. When the Civil War began, the Union abandoned the Naval Base at Norfolk, Virginia, burning everything they could in retreat. The Confederacy took the base, and raised the sunken Union ship USS Merrimack. They then turned her into the ironclad CSS Virginia. The Union Navy placed an embargo on all Southern ports, including the entrance to the Southern capitol of Richmond. The South attempted to break this embargo with their new ironclad ship, sinking two Union wooden “ships of the line” in the process. The Virginia returned to base for the night, then returned to finish off the last major embargo ship on 9 March, 1862. She was confronted by the Union version of the ironclad…the USS Monitor. The two new iron ships battered away at each other for over three hours without seriously damaging each other, and then withdrew. The Virginia would be scuttled at her base as the Union advanced…the Monitor would be lost at sea. But more importantly….navies worldwide…Britain, France, Spain, the Far East, watched and realized that their wooden navies had suddenly become obsolete.