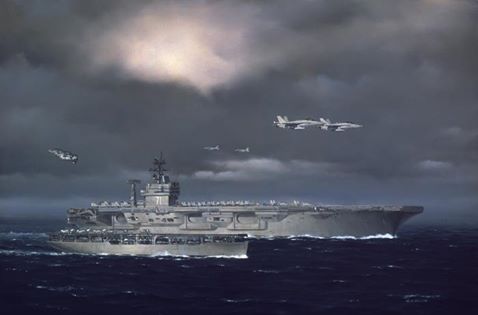 Today in History, March 25: 1898 – Assistant Secretary of the Navy Theodore Roosevelt proposes that the Navy investigate the use of a flying machine being researched by Samuel Langley. As a result, congress authorized $50,000 to support Langley’s design. The Wright Brothers may have accomplished the first manned, powered flight, but many people had been working on the challenge for years. Langley’s, and Roosevelt’s insight was the beginning of US Naval Aviation. Check out this print by R.G. Smith, which portrays the 1st US aircraft carrier, the USS Langley (CV 1), and the nuclear powered aircraft carrier USS Theodore Roosevelt (CVN 71) cruising together. Of course this is inspired imagination…Langley’s namesake ship was lost in WWII.

The Langley was converted from the Collier USS Jupiter in 1920.  By WWII she had been converted to a seaplane tender, her larger subsequent sisters taking on the aircraft carrier role.  Attempting to deliver p-40 fighter planes to Java, on February 27, 1942 she was attacked by Japanese aircraft and damaged so badly she had to be scuttled.