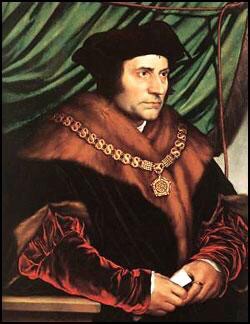 Today in History, May 16: 1532 – “The King’s good servant, but God’s first.”. Sir Thomas More resigns his position as Lord Chancellor of England. More was a humanist in a time when civil rights bore little importance. He was also an author, having written the still important “Utopia” about a land without the problems he found in the real world. He advanced to Lord Chancellor and was fiercely loyal to King Henry the VIII. But when the King usurped the authority of the Pope so that he could divorce his queen, the devout Catholic More could not countenance it and resigned. Within 3 years charges of treason had been trumped up, he was tried by his replacement and the new queen’s father and two brothers, then beheaded. The beginning of this post were his last words. He was canonised by the church in 1935, making him Saint Thomas More.