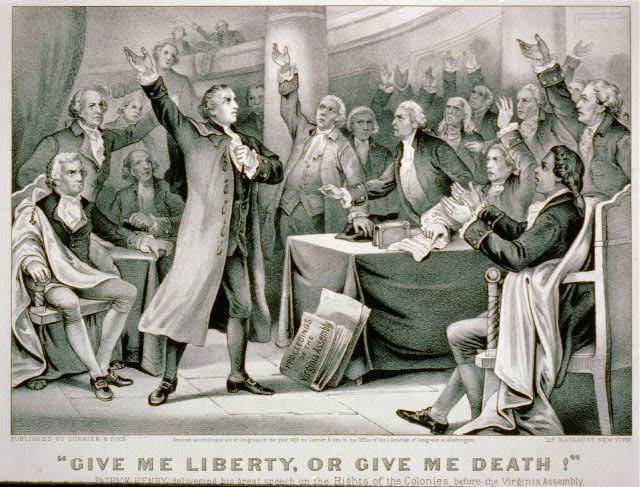 On his 29th birthday, as a Representative in the Virginia House of Burgesses, he presented the Virginia Resolves on the Stamp Act…a response to British taxation without representation of the colonies.  The next day he gave a speech which riled his contemporaries.  Remember that at this time he and all colonists were proudly British subjects:

“Caesar had his Brutus, Charles the First his Cromwell, and George the Third—” when, it is reported, voices cried out, “Treason! treason!” “—and George the Third may profit by their example! If this be treason…make the most of it.”

This brought a backlash for which he apologized.  He was not calling for the King’s assassination, but saying he should pay heed to history.

His most famous speech, of course, came during the second Continental Congress:

“Gentlemen may cry, Peace, Peace —
but there is no peace. The war is actually begun!
The next gale that sweeps from the north will bring to our ears the clash of resounding arms!

Our brethren are already in the field! Why stand we here idle? What is it that gentlemen wish? What would they have?

Is life so dear, or peace so sweet, as to be purchased at the price of chains and slavery?

Forbid it, Almighty God! I know not what course others may take but as for me,

Give me liberty or give me death!”