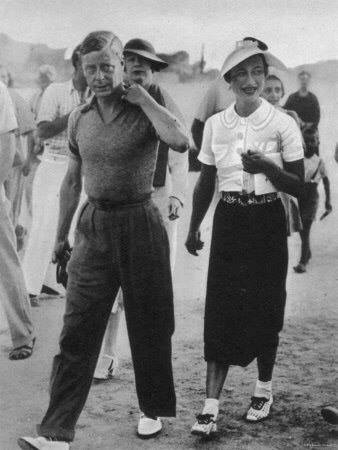 Today in History, June 3: 1937 – British Duke of Windsor, formerly King Edward VIII marries American double divorcee Wallis Simpson Warfield in France. In what is usually described as the ultimate romantic tale, the King had abdicated the throne in 1936 so that he could marry the American woman. However…the rest of the story. She had already married and divorced an American Naval pilot, and carried on her affair with Edward during her second marriage. Once she obtained her divorce and married the now former king (his family wanted nothing to do with her), they settled in France. The only Parliament member that had supported Edward, Winston Churchill, soon became Prime Minister. Now he had to “handle” the problem of the Duke and his spouse, who had, in the interim, become Nazi sympathizers. In the mixed up politics of Europe in thirties, this was not necessarily as odd as it seems. Nonetheless, the Duke and his wife were now a dangerous embarrassment to the crown. A saddened Churchill convinced Edward to sneak out of Spain and accept a post as Governor of the Bahamas…what amounted to banishment. He accepted and spent the war years talking badly about his own country from a distance. Not quite the romantic figure portayed.