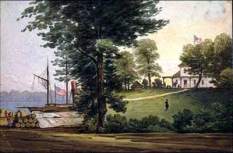 Today in History, June 28:  1862 – Union soldiers inadvertently burn the White House.  No, not that White House.  In fact, the Executive Mansion which housed the President wasn’t known by that name until 1902 when President Theodore Roosevelt renamed it.

Another difference between these “White Houses”, is that George Washington never resided in the Presidential Mansion along the Potomac.  His successor, John Adams was the first President to live there.  But he courted and married the widow Martha Custis at and near the White House on the Pamunkey River.

One of General Washington’s officers was Henry “Light Horse Harry” Lee.  His son, Robert E. Lee, would marry Martha Custis-Washington’s granddaughter, Mary.  Together they would live in Arlington House, overlooking the Potomac…and the Executive Mansion.  When the Civil War began, Robert E. Lee chose to support “his country”, Virginia; which also meant the Confederacy.  As a result he and his family had to leave Arlington House and move to one of their more southern Virginia properties…the White House on the Pamunkey.

As the Union dead mounted, Union Secretary of War Edwin Stanton ordered the area around Arlington House to be used as a cemetery so that Lee could never again live there.  Today it is Arlington National Cemetery.

In 1862 during the Seven Day’s Battles, Union forces pushed the Confederates back past Lee’s family’s new home at White House Landing, using it as a major supply base.

Before she fled further south from yet another home, Mary Lee left a message on the door of the residence, “Northern soldiers, who profess to reverence Washington, forbear to desecrate the house of his first married life, the property of his wife, now owned by her descendants.”  Union soldiers agreed.  General George McClellan ordered a guard to posted around the house to prevent looting or vandalism.

McClellan took a lot of heat from the press and DC for the protection of General Washington’s one-time home.  It should be used as a hospital for Union soldiers!  Even though it had but six rooms.

As was frequent in the Civil War, the lines moved back north after moving south.  And on this date in 1862 Confederates took White House Landing back.  As the Union Army fled, McClellan ordered all supplies and outbuildings burned to prevent their use by the Confederates…with the exception of the White House, it was to be spared.

As often happens in war, orders from the top rarely get carried out to the letter.  The White House was burned to the ground.