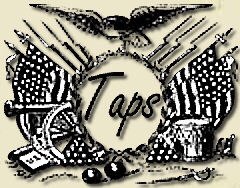 Today in History, July 2: 1862 – Union Colonel Daniel Butterfield (breveted to Brigadier General), unhappy with the signal being given for “Lights Out” for his brigade, pens a new one which he gave to the brigade bugler. Sounded for the first time that night in its new form, what would be known as “Taps” was quickly taken up by other brigades, North and South because of its haunting 24 notes.

There are many versions of wording for Taps, but these are the most meaningful to me:

The tune now is much more than “Lights Out”, serving as a final honor at the services for servicemen and servicewomen, and police officers.