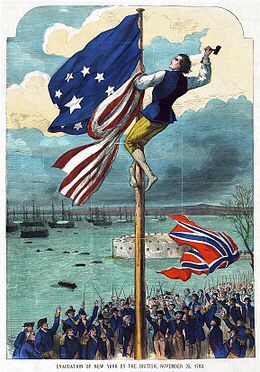 At the outset of the war Gen. George Washington had wanted to fight to keep NYC, but after losing tactically to British forces, had to flee with his army in the dark of night. NY would remain in British hands throughout the war.

After the last British troops left, Gen. Washington entered the city to great fanfare from its citizens.

He would later be inaugurated as the first President in the city that would become the nation’s first capitol.