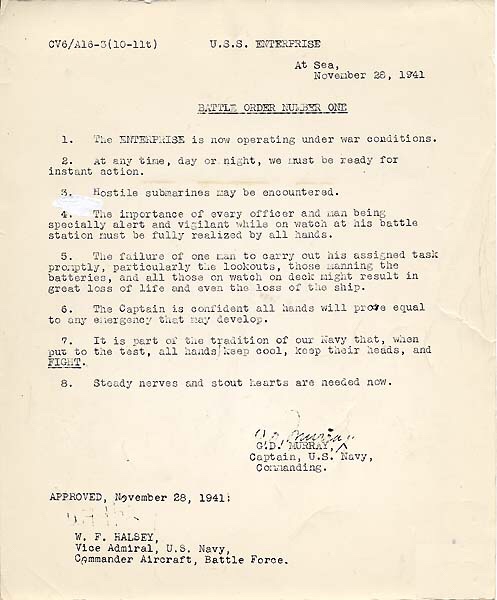 In response to a “war warning” the Enterprise had taken aboard a squadron of US Marine F4F Wildcat fighter planes and their pilots, with orders to deliver them to Wake to bolster the island’s defenses.

Once they were at sea, the TF commander, Admiral William F. (Bull) Halsey signed off on Battle Order #1, which put the Enterprise and her supporting Cruisers and Destroyers on a war footing.

The crew began adding armor behind the pilot’s position’s in the ship’s fighters, painting them in combat colors, and arming them for combat.

More than a week before the Japanese attacked, the Enterprise TF had orders to shoot first and ask questions later should they encounter any foreign ships or planes. The CAP (Combat Air Patrol) kept watch overhead.

The Big E would deliver the Marines and return to Pearl on Sunday, December 7. Her scout plane pilots would fly ahead, ending up right in the middle of the air raid. But that’s another story.

But on this date, Admiral Halsey and Captain Murray closed by telling their sailors “Steady nerves and stout hearts are needed now.”