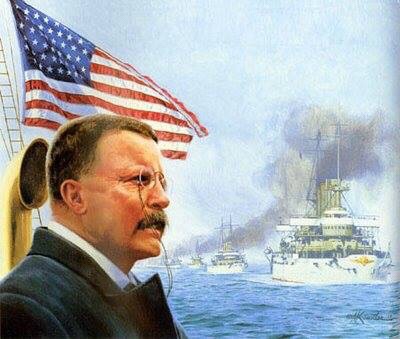 The Great White Fleet, a task group of 16 American battleships and their support ships, sets sail from Hampton Roads, Virginia beginning a world good will tour, circumnavigating the Earth. President Theodore Roosevelt had long been a proponent of sea power in line with the teachings of Admiral Alfred Thayer Mahan, that a strong Navy could project authority world wide. The fleet of white warships were to provide cordial visits to ports in nations that were potential adversaries, most prominently, Japan. There were many other purposes, such as improving morale and patriotism during a depression at home, and research to improve the seagoing capabilities of the US Navy. The Great White Fleet displayed to the world something that still stands today, although greatly enhanced. That the US Navy could project American influence anywhere in the world. The journey would take 14 months until February of 1909, and would take the fleet through the dangerous Straits of Magellan and across the Pacific. The event was a sensation the world over, as moving so many coal powered ships so far was a remarkable achievement.