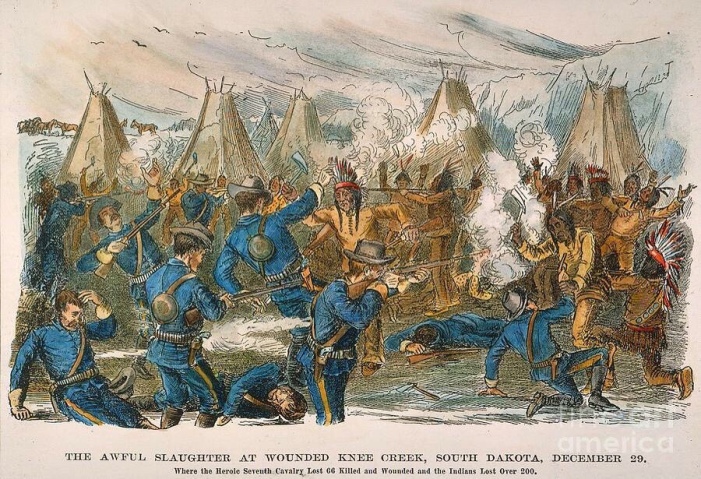 Massacre at Wounded Knee. “I did not know then how much was ended. When I look back now from this high hill of my old age, I can still see the butchered women and children lying heaped and scattered all along the crooked gulch as plain as when I saw them with eyes young. And I can see that something else died there in the bloody mud, and was buried in the blizzard. A people’s dream died there. It was a beautiful dream … the nation’s hope is broken and scattered. There is no center any longer, and the sacred tree is dead.” – Black Elk, Lakota Sioux Medicine Man.

“scuffle occurred between one warrior who had [a] rifle in his hand and two soldiers. The rifle was discharged and a battle occurred, not only the warriors but the sick Chief Spotted Elk, and a large number of women and children who tried to escape by running and scattering over the prairie were hunted down and killed.” – Gen. Nelson A. Miles, US Army.

Most of the Lakota were demoralized by life on the reservations due to the impoverished and bitter conditions. A new religious belief began to spring up and gave them hope…that by performing the Ghost Dance, their dead would return, the Bison would become plentiful again, and the white men would leave, allowing them to return to their former lives.

There were no plans to attack anyone, but the increasing fervor of the movement made the Indian Agent nervous and he called for military protection. It came in the form of the 7th Cavalry, Custer’s old command, and some of the soldiers at Wounded Knee had been with Capt. Benteen at Little Big Horn.

Earlier in December an attempt was made to arrest famed Sitting Bull at his home, who was not part of the movement. When he pulled away from one of those attempting to arrest him, he and several others were killed. Tensions rose…

On December 28th a contingent of the 7th intercepted a band of Lakota and escorted them to Wounded Knee Creek, where they all camped. On the 29th the remainder of the 7th arrived and surrounded the camp, supported by 4 rapid fire Hotchiss guns…

Col. James Forsyth ordered that the Indians be disarmed. Troopers moves about the encampment, seizing weapons. When they attempted to take Black Coyote’s rifle (he was deaf and didn’t understand their commands) he protested. A scuffle ensued and a shot was fired. Nobody knows if it was his rifle going off or a nervous participant, but that is all it took.

The troopers surrounding the camp opened fire with all they had, and chased fleeing men, women and children across the plains. When it was over 150 Lakota and 25 troopers lay dead. Most of the Sioux bodies would not be recovered until a blizzard occurring the next few days passed. This was the last battle (if you can call it that) of the Plains Indian Wars. Commanding Gen. Miles removed Forsyth from his command, but he would be reinstated.