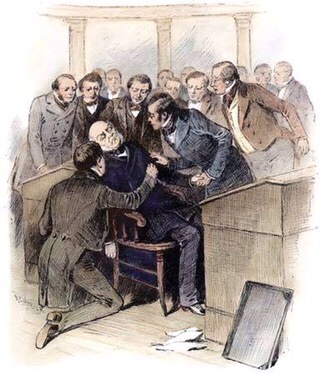 “Where else would we find him?”

Former President, former Secretary of State, Former US Senator from Massachusetts, current Representative to the House John Quincy Adams, collapses after suffering a stroke while vehemently stating his opinion on the House floor.

Adams had, by most reports, been a mediocre President.

However he had authored the Monroe Doctrine telling European nations that America was in charge of police actions in the Western Hemisphere; he had served as the Ambassador to the Court of St. James (England); had negotiated the ceding of Florida to the US from Spain; had acted as the attorney for the slaves in the Amistad Trial; stated his vehement abolitionist views, and served 17 years in the House after his Presidency…because that’s what a servant to the people was supposed to do.

His contemporaries were not surprised that he would die while serving the people. He was carried to the office of the Speaker of the House, where he would die two days later. What an example!