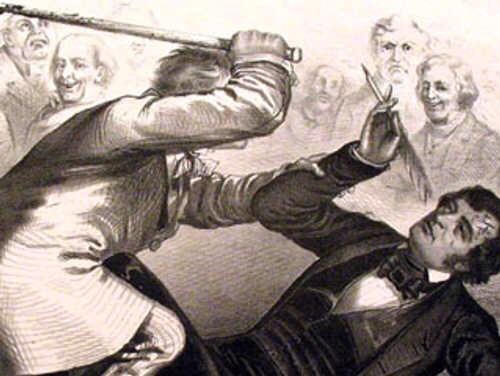 Years before the Civil War. On May 20, 1856 US Senator Charles Sumner, a free soil Democrat and later Republican from Massachussetts, had given a firey speech entitled “Crime Against Kansas” about the violence in that state over slavery.

A devout abolitionist, he excoriated the south, in particular Senator Andrew Butler of South Carolina, who he likened to a pimp abusing a prostitute (slavery).

This enraged Butler’s nephew, Senator Preston Brooks. When Sen. Stephen Douglas heard the speech, he commented, “this damn fool Sumner is going to get himself shot by some other damn fool.”

On the 22nd, Brooks entered the Senate chamber with two other Southern Senators, found Sumner at his desk writing and proceeded to bludgeon him nearly to death with his heavy metal tipped cane while Sumner was trapped within his desk, defenseless.

Northerners called him a coward. One of these, Republican Representative Anson Burlingame called him such on the House floor.

Brooks challenged Burlingame to a duel. When Burlingame actually accepted and showed up, Brooks did not.

Sumner would suffer debilitating pain for the rest of his life from his injuries, but would recover to become a key proponent of abolitionist policies during reconstruction, living until 1872.

Brooks on the other hand died in January 1857, less than a year after the attack, of the croup.