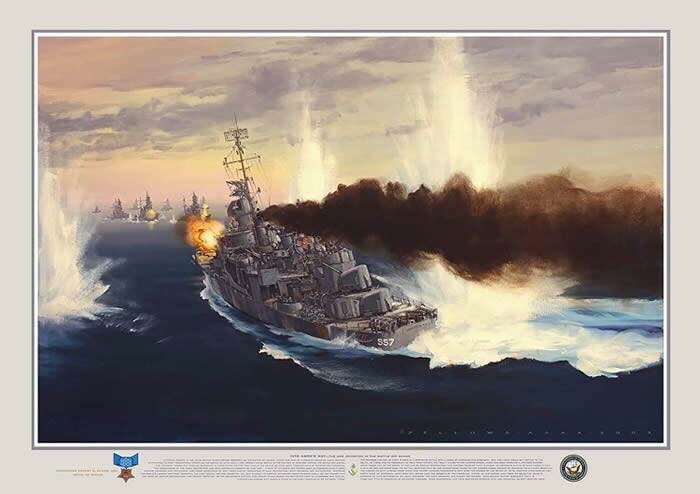 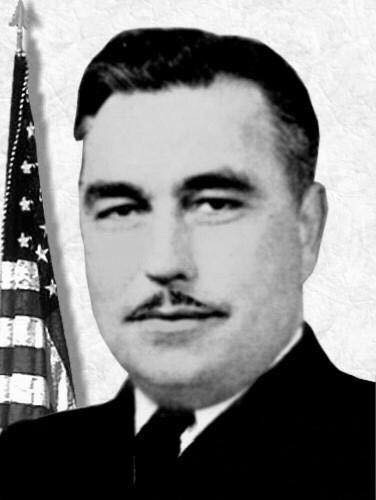 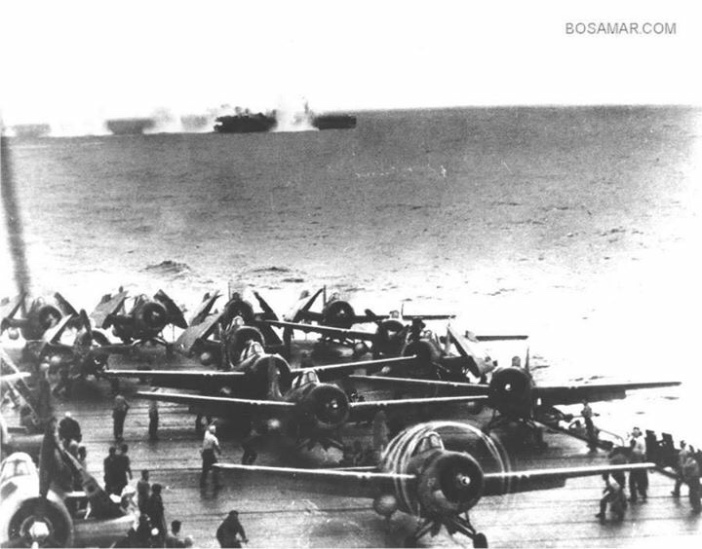 A desperate fight for survival, The Battle off Samar.

The Battle off Samar was only one of several major naval conflicts that constituted the Battles of Leyte Gulf. A few days previous, Gen. Douglas MacArthur had returned to the Philippines and invaded Leyte. His invasion was supported by what is likely the largest assembled fleet in history.

In the days since the invasion began, the Japanese Navy had sent 3 battle groups to intercede. One group of Battleships, cruisers and destroyers were to approach the landing forces in Leyte Gulf through Surigao Strait, another built around the massive IJN Yamato was to approach via San Bernadino Strait, and the last, built around Fleet Carriers with few planes left, was to sail far to the north and make sure they were seen, so that major US forces defending the thin skinned landing ships would leave them unprotected.

The Japanese fleet approaching through Surigao Strait was decimated by American Battleships raised from the mud of Pearl Harbor in the last Battleship vs Battleship engagement in history (US Cruisers and Destroyers were key also).

Admiral Kurita’s force around Yamato was bombed on the 24th and turned back.

Admiral William F. Halsey, known to Americans and Japanese for his aggressive nature (By the time we’re done, the Japanese language will be spoken only in hell) commanded the US 3rd fleet…4 battle groups of 4 fast carriers each, and another of fast battleships.

He took the bait, going after the Japanese carriers that were actually playing no combative part in the battle.

This left only cargo ships, small combatants, and “Jeep Carriers”, or Escort Carriers…basically cargo ships with a flight deck built atop their small, thin hulls. The escort carriers were tasked with close support for troops ashore, and were not equipped for a sea battle.

So far, I’ve just set the stage for the events of the Battle off Samar Island…now for the good part. There were 3 small escort carrier task forces left in Leyte Gulf…Taffy 1, Taffy 2 and Taffy 3. As they began operations on the morning of the 25th, Admiral Clifton “Ziggy” Sprague and the men of Taffy 3 were shocked to find that IJN Admiral Kurita’s task force of fast battleships, cruisers and destroyers, who had turned around in the night, bearing down on them. I recently finished “Last Stand of the Tincan Sailors” by James Hornfischer, and although I knew about this battle, I found out much more, and Oklahoma connections.

The entirety of Taffy 3…6 jeep carriers, 2 Fletcher class destroyers and 3 destroyer escorts…did not match the tonnage of the Yamato alone. And Yamato was joined by several other Battleships, Cruisers and destroyer task forces. The Japanese could manage much more speed than the small American ships, and their guns (18 inch for the Yamato, 14 and 8 inch for the others, out-ranged the American’s 5 inch guns by MILES. As the long range rifles (22 miles avg) began dropping shells around the carriers and destroyers, Admiral Sprague ordered the small destroyers and destroyer escorts to lay smoke and attempt to delay the inevitable. Oklahoman Harold Kite, loading a 5 inch gun on the stern of the carrier USS Fanshaw Bay, watched the tiny escort ships turning to race towards the huge enemy ships, and likened them to the horses that had raced across the plains of central Oklahoma as he was growing up, and marveled at their courage.

The closest escort ship to the Japanese fleet, the USS Johnston, was commanded by another Oklahoman…Commander Ernest E. Evans, known to his Annapolis classmates as “Chief” for his Cherokee heritage. His crew knew what they were in for. Cmdr. Evans had been there for the American defeat during the Guadalcanal campaign, and took his warrior heritage seriously.

When he took command of the Johnston, he told her crew, “This is going to be a fighting ship. I intend to go in harm’s way, and anyone who doesn’t want to go along had better get off right now. Now that I have command of a fighting ship, I will never retreat from an enemy force.”

And he didn’t. Under the fire of longer range, larger guns and other fast destroyers, he raced in close, ordering his gun crews to fire constantly, which they did with amazing effect, and launched his small ship’s torpedoes against the enemy, achieving strikes that disabled cruisers. Fighting to the end, Evans was looking after the survivors of his sinking ship when a Japanese shell destroyed the part of the superstructure he was in, and he went down with his ship.

The other American destroyers and destroyer escorts (even smaller) followed suit, delaying the Japanese ships and confusing them to the point that the Japanese thought they were actually fighting American cruisers and fast carriers…heavies in Navy parlance.

The Jeep carrier’s aircrews were launched in desperation as the battle began…armed with whatever they had…depth charges, anti-personnel bombs, but nothing that was designed to sink ships. The aircrews, flying torpedo bombers, dive bombers and fighter planes, attacked the Japanese ships with desperate ferocity. They dropped the depth charges as best they could beneath enemy ships, dropped their bombs, then came back and made runs against the enemy ships without arms because it would mean the IJN ships had to evade (and slow down) since they didn’t know there were no torpedoes or bombs on the American aircraft. One pilot, out of ammunition, flew alongside a Japanese heavy, opened his canopy, and emptied his .38 revolver into the ship’s bridge to the amazement of her crew.

The flyers then flew to a land base on Leyte and re-armed to attack again. In the end, Admiral Kurita, believing he was attacking a much larger force, ordered his massive force to turn about and retreat.

As for Halsey, who couldn’t leave even his Battleships, or even 4 of his 16 Carriers to defend the Taffy’s and the all but defenseless cargo ships in Leyte Gulf….he received a dispatch from his boss, Admiral Chester W. Nimitz, asking, “Where is Task Force 34? All the world wonders.” The story is that “all the world wonders” was just jibberish added to transmissions to confuse the enemy…but the result was an angry Halsey throwing his cap to the deck and spewing a string of invectives. Of the destroyers, including the Johnston and the Samuel B. Roberts that went down in the battle? Amazingly, many of their crew were lost to sharks before they were rescued in the days hence, the result of faulty reports of their locations. So many brave heroes.