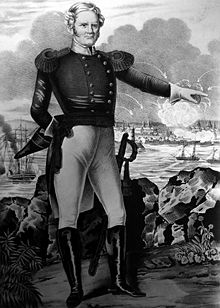 76-year-old Gen. Winfield Scott steps down as commander of the Union armies due to his age and poor health; 300+ pounds and suffering from gout, Scott could no longer mount a horse without assistance, much less be effective in the field.  He was all but run out of the US Army he loved by a much younger, ambitious officer, Gen. George McClellan.  McClellan was also a brilliant officer, but did not have Scott’s leadership qualities.

However Scott had been a hero; a soldier since 1808, he fought in the War of 1812, wrote many of the rules and regulations for the fledgling American Army, and used brilliant tactics in the Mexican War.  Much of what the US Army has become, is because of Winfield Scott, who in his youth struck an imposing figure.

Most interesting to me is that although he retired in bad shape, Scott had trained and led most of the senior commanders on both sides of the Civil War throughout the years and during the Mexican War. Grant, Lee and many others honed their skills under his tutelage.

When the war began, General Scott had a plan which he called “The Anaconda Plan”, designed to encircle the Confederacy and exert pressure from all sides at once.  McClellan rejected this idea, and fought a losing piecemeal war for years.  Ironically, the war was won in the end when President Lincoln and Gen. Grant used tactics putting pressure on all sides of the South at once.  General Scott had been correct all along.

One thought on “An Unfairly Ignominious End to a Brilliant Career”