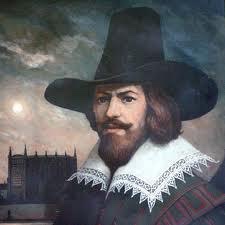 Today in History, November 5, 1605: …The Gunpowder treason and plot…

The Gunpowder Plot. Several Catholic conspirators had hatched a plan to blow up the Parliament building in London while the king and parliament met.

One of the conspirators told a relative not to attend, and that relative told authorities. On the night of November 5th, conspirator Guy Fawkes was caught lurking in the basement of the building, and subsequently 20 barrels of gunpowder he had hidden there were located.

Fawkes named his conspirators under torture. Several, including Fawkes, were sentenced to be drawn and quartered. As Fawkes climbed a ladder to the gallows, he jumped to his death. Today is Guy Fawkes day in England, celebrating the failure of the plot.

In recent years it seems to have become popular to don a Guy Fawkes mask to render yourself anonymous to protest anything from injustice to prices.

The Fifth of November

Remember, remember!
The fifth of November,
The Gunpowder treason and plot;
I know of no reason
Why the Gunpowder treason
Should ever be forgot!
Guy Fawkes and his companions
Did the scheme contrive,
To blow the King and Parliament
All up alive.
Threescore barrels, laid below,
To prove old England’s overthrow.
But, by God’s providence, him they catch,
With a dark lantern, lighting a match!
A stick and a stake
For King James’s sake!
If you won’t give me one,
I’ll take two,
The better for me,
And the worse for you.
A rope, a rope, to hang the Pope,
A penn’orth of cheese to choke him,
A pint of beer to wash it down,
And a jolly good fire to burn him.
Holloa, boys! holloa, boys! make the bells ring!
Holloa, boys! holloa boys! God save the King!
Hip, hip, hooor-r-r-ray!

One thought on “Remember, Remember, the 5th of November…”