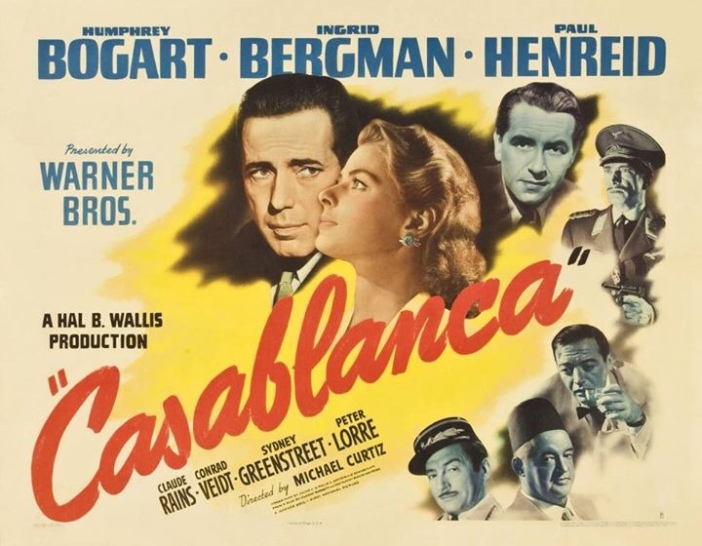 The motion picture “Casablanca” premieres in New York City.  The movie that would become a screen classic would be released to theaters in the remainder of the country on January 23, 1943.

The film was set in Casablanca, Morocco in December, 1941.  This time frame is important to the viewer if not the players.  Rick Blaine is an exiled American who owns a high-end bar.  Between continuously matching wits with the local French authorities and Nazis, Rick manages to barter for immigration papers for those fleeing the Nazis and to deal with an old romance interest who re-enters his life…Ilsa.  “Of all the gin joints in all the towns in all the world, she walks into mine.”

The film is at heart a romance, but at the same time a gritty war thriller.  Humphrey Bogart was well accustomed to playing the heavy, and did so well.  Ingrid Bergman did an excellent job playing the femme fatale, but by the time the show is over, one is hard pressed not to find Claude Rains’ portrayal of Captain Louis Renault to be the most compelling.

The plethora of one-liners definitely added to place Casablanca at the top of any “greatest” list, even 75 years later.  Near the end of the film, Rick and Louis are caught at the airport by Nazi SS Major Strasser.  Louis ends up shooting the Major.  As Louis’ troops rush up in response to the shot, Louis says hastily, “Major Strasser’s been shot.  Round up the usual suspects.”

It is important to note the film was released less than a year after the Pearl Harbor attack at a time when the question of who would be victorious was still a very open discussion.  Those viewing the movie most likely had fathers, brothers and sons fighting on a steaming, miserable island named Guadalcanal or on ships in the same theater.  Less than a month earlier (November 8) American soldiers and sailors took part in the landings of Operation Torch assaulting French North Africa.  This would include fighting the Nazis and the Vichy French (French sympathetic to or under the thumb of the Nazis.)  These battles would include Morocco and the Naval Battle of Casablanca between Allied, German and Vichy French naval forces.

All of this was the backdrop for the premiere of Casablanca.  How much more real, how much more emotion, must have been involved seeing it for the first time in 1942.