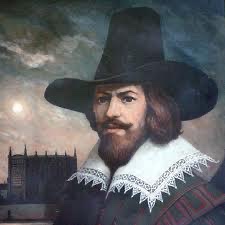 Several Catholic conspirators had hatched a plan to blow up the Parliament building in London while the king and parliament met.

One of the conspirators told a relative not to attend, and that relative told authorities. On the night of November 5th, conspirator Guy Fawkes was caught lurking in the basement of the building, and subsequently 20 barrels of gunpowder he had hidden there were located.

Fawkes named his conspirators under torture. Several, including Fawkes, were sentenced to be drawn and quartered. As Fawkes climbed a ladder to the gallows, he jumped to his death.

Today is Guy Fawkes day in England, celebrating the failure of the plot.