Francis Salvador becomes the first American of Jewish descent to hold public office in America, being named to the South Carolina Provincial Congress.

Salvador had immigrated from London and almost immediately took up his adopted nation’s cause for independence.

It was against the law for Jews to hold public office in the colonies, but his neighbors didn’t care and elected him anyway.

In the months to come the English used Indian and Loyalist allies to create havoc in the back country. On July 1st Salvador rode 28 miles to warn others of impending attacks.

One month later he was leading a militia group when it was ambushed.

He was shot during the attack and scalped by the Indians, making him also the first Jewish-American killed during the War for Independence. 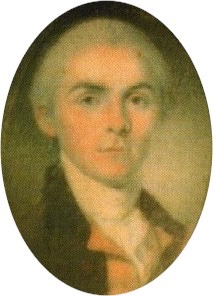 Robert Forsythe, veteran of the Revolutionary War, had been appointed by George Washington as the first US Marshal for the state of Georgia.

On this date in 1794, Forsythe was serving civil papers when he became the first US Marshal to be killed in the line of duty.

The person he was attempting to serve, a former Methodist minister, fired on him through a door when Forsythe knocked, killing him instantly.

His son would go on to be Governor of Georgia and then US Minister to Spain, where he would negotiate the ceding of Florida to the US.

“…And that’s about all I have to say tonight, except for one thing. The past few days when I’ve been at that window upstairs, I’ve thought a bit of the “shining city upon a hill.” The phrase comes from John Winthrop, who wrote it to describe the America he imagined. What he imagined was important because he was an early Pilgrim, an early freedom man. He journeyed here on what today we’d call a little wooden boat; and like the other Pilgrims, he was looking for a home that would be free.

I’ve spoken of the shining city all my political life, but I don’t know if I ever quite communicated what I saw when I said it. But in my mind it was a tall, proud city built on rocks stronger than oceans, wind-swept, God-blessed, and teeming with people of all kinds living in harmony and peace; a city with free ports that hummed with commerce and creativity. And if there had to be city walls, the walls had doors and the doors were open to anyone with the will and the heart to get here. That’s how I saw it, and see it still.”

Reagan had spoken of the “Shining city on a hill” throughout his career, and in a 1974 speech he quoted Winthrop; “Standing on the tiny deck of the Arabella in 1630 off the Massachusetts coast, John Winthrop said,

“We will be as a city upon a hill. The eyes of all people are upon us, so that if we deal falsely with our God in this work we have undertaken and so cause Him to withdraw His present help from us, we shall be made a story and a byword throughout the world.”

What will we leave behind when we “Walk off into the city streets?”