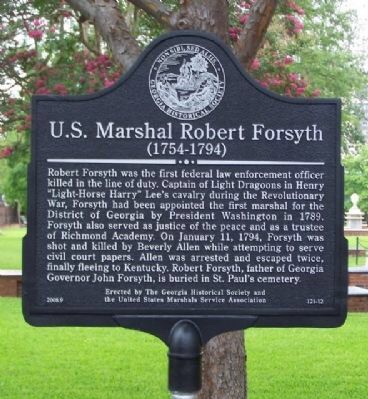 Robert Forsythe, veteran of the Revolutionary War, had been appointed by George Washington as the first US Marshal for the state of Georgia.

On this date in 1794, Forsythe was serving civil papers when he became the first US Marshal to be killed in the line of duty.

The person he was attempting to serve, a former Methodist minister, fired on him through a door when Forsythe knocked, killing him instantly.

His son would go on to be Governor of Georgia and then US Minister to Spain, where he would negotiate the ceding of Florida to the US.