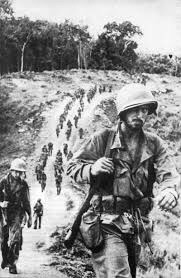 Today in History, August 7: 1942 – The US Marines had fought since the Revolution, incuding WWI (Belleau Wood) but it was THIS day in 1942 that began the legend of the US Marines for many.

The Gyrenes went ashore on a humid, muddy, malaria infested jungle island named Guadalcanal; initially to little resistance. Soon they were fighting for every inch of ground against an enemy that was more than willing to die. The battle would last for over six months, during which the Marines lived in muddy ditches, lived on what rations they could find and suffered nightly bombardment by the Imperial Japanese Navy…but they persevered, conquered and then, after buying the island with their blood, handed it over to the Army. Why was Guadalcanal so important?

The Japanese occupied Guadalcanal to build an airfield there. At the eastern most extremity of the Solomon Islands, the airfield would allow the Japanese to use long range aircraft to cut off supply lines to Australia.

The Marines quickly took the airfield, and named it Henderson Field, after a Marine Captain that gave his life at another pivotal battle, Midway. The Marines struggled back and forth over Henderson for months, but held it…which meant that the Marine air and Navy air forces called The Cactus Airforce could defend the island from nightly bombardment and constant attempts at reinforcement by Japanese forces.

Both Navies lost 24 ships…most of which carpet “Iron bottom sound” off the coast of Guadalcanal and Savo Island.  The months ahead would bring many important battles for the Navy and the Marines…but on this date in history, the United States Marines began the battle that proved their place in history.