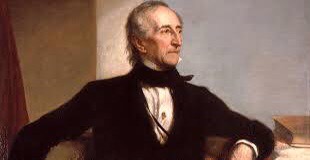 Today in History, August 16: 1841 – Rioters burn President John Tyler in effigy directly in front of the White House. The importance of this act is complicated and involved Tyler’s former rivals. The Bank of the United States had been in charge of the nation’s finances off and on since it was originally established during President Jefferson’s tenure. One of the major events of President Andrew Jackson’s presidency involved the bank. Jackson found the bank to be corrupt, manipulating markets and committing fraud. Jackson refused to renew the bank’s charter, preferring instead to have the nation’s moneys spread amongst many banks. Many criticized Jackson for this, including then Senator Tyler. Later President Martin Van Buren again refused to renew the bank’s charter. When Tyler became President, the Whigs thought he would renew the bank’s charter. However from his new position he was able to see what Jackson observed, and he too refused to renew the charter. Another important note in this series of events….the District of Columbia established a police force to deal with such violence after the events in front of the White House.

As an interesting aside, President Tyler had many children, who also went forth and multiplied. John Tyler was born in 1790 and still has two living grandsons.