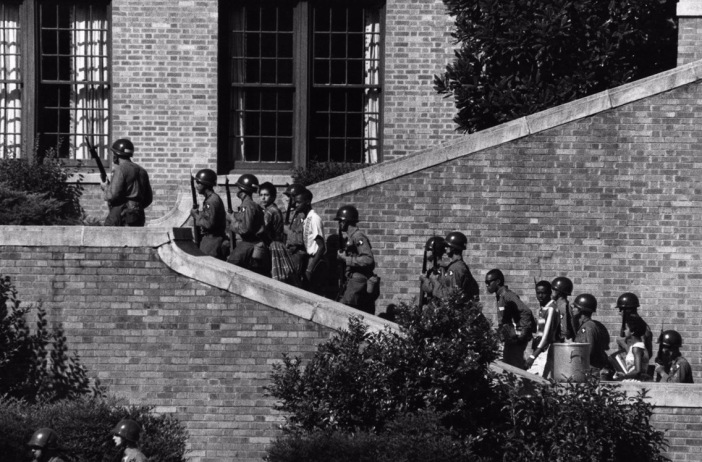 The Little Rock Nine and historic connections. In 1954 the Supreme Court decided in Brown vs Board of Education that desegregation of public schools was the law of the land. In 1957 one of the first tests of the law began when 9 African-American students were enrolled in Little Rock Central High School in Arkansas.

Local police escorted them at first, but their task was soon overwhelming as over 1,000 angry whites protested the students. The Arkansas Governor supported the protestors. But the odds were stacked against him. Not only was righteousness inevitable, but he and the protestors were soon up against President Dwight Eisenhower, who activated 1,200 men of the US Army 101st Airborne Division to provide security, escort the students and keep the peace in Little Rock. Eisenhower also FEDERALIZED the 10,000 soldiers of the Arkansas National Guard, taking them out of the control of the Arkansas governor and putting them to work keeping the peace at the school for the remainder of the school year.

The Historic connections? What chance did racism have when confronted by the General whose command had defeated Hitler and the Nazis during WWII and the soldiers of the Airborne unit that dropped into Normandy on D-Day, then fought their way across Europe? (See the photo of Eisenhower addressing the 101st before they flew into history). With only 13 years between the two events, could some of the men who fought tyranny at D-Day been there at Little Rock protecting those brave children? The Civil Rights movement was well on it’s way. I love History.